About Finger of God

Finger of God began as a short film about God’s miraculous power. I had no budget, no script, and no idea what this movie was ultimately going to look like. I teach storytelling and film at a University in Chicago, and here I was breaking all of my own rules. 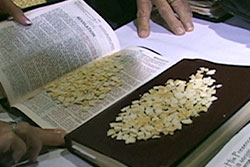 But that’s where I found myself, and I quickly discovered that God is an incredible film producer. He funded the whole film (I never had to ask for money), took me around the world, and introduced me to some truly incredible people.

So what is the film about? Well, now that it’s finished, I can finally answer that question. On the surface it is about the miraculous. I originally thought I was making a film that simply tried to capture miracles on tape. But as the story progressed, things began to change. 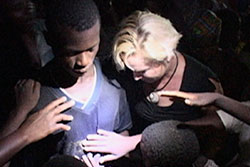 At its core, it is about the heart of God. It’s about how He views us, and how He is desperate for a relationship with us. Along the way, He places his finger on our lives, touches us deeply, heals us, shows His creativity, and generally surprises us with every move He makes.

The film’s international cast includes a wide variety of people, ministries, and personalities. But just to whet your appetite, here is a partial list of some of the things you will see and hear about in this film: 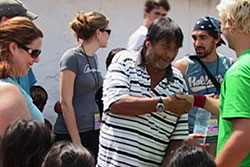 The first thing people wonder when they hear about a film like this is usually, “Who made it, and what’s his angle?” Well, my name is Darren Wilson, and Finger of God is my directorial debut. I teach Writing and Media at Judson University, which is about 30 miles west of Chicago. I have a lovely wife, Jenell, and three wonderful children, Serenity, Stryder, and River. I have an MFA in Screenwriting from Regent University, in Virginia Beach, Virginia.

So that’s me. But what about my angle? It can probably be summed up in one word. Accidental. I never intended to make this movie. To be honest, I originally didn’t even want to make this movie. I had no money, I had never made a feature film before, and I didn’t know anyone I needed to know. But God has a way of getting what He wants.

So I began stumbling through the process of making a movie. It began as a short film, then turned into a long film. I began to meet more and more people, began to receive more and more money from friends and family, and before long, I find myself in Istanbul, filming Heidi Baker and a Turkish Muslim trying to have a conversation, and I can’t help but chuckle at God’s sense of humor – as well as His sense of purpose.

Every artist has an agenda. Mine is simple. Document what God is doing in the world today, prove that He is alive and relevant, and don’t bog Him down with my own preconceived ideas of how He should go about being God.

WP Films was founded by Darren Wilson in 2006 when he began work on what would become his first feature length film, Finger of God. The company currently concentrates on asking great questions and letting God answer them through reality filmmaking.

Finger of God is now available
at christian retail on DVD.